A new announcement will impact the lives of our military members and their families! This week, President Biden signed the Camp Lejeune Justice Act permitting those affected by the contaminated water at Camp Lejeune to file a claim for compensation. 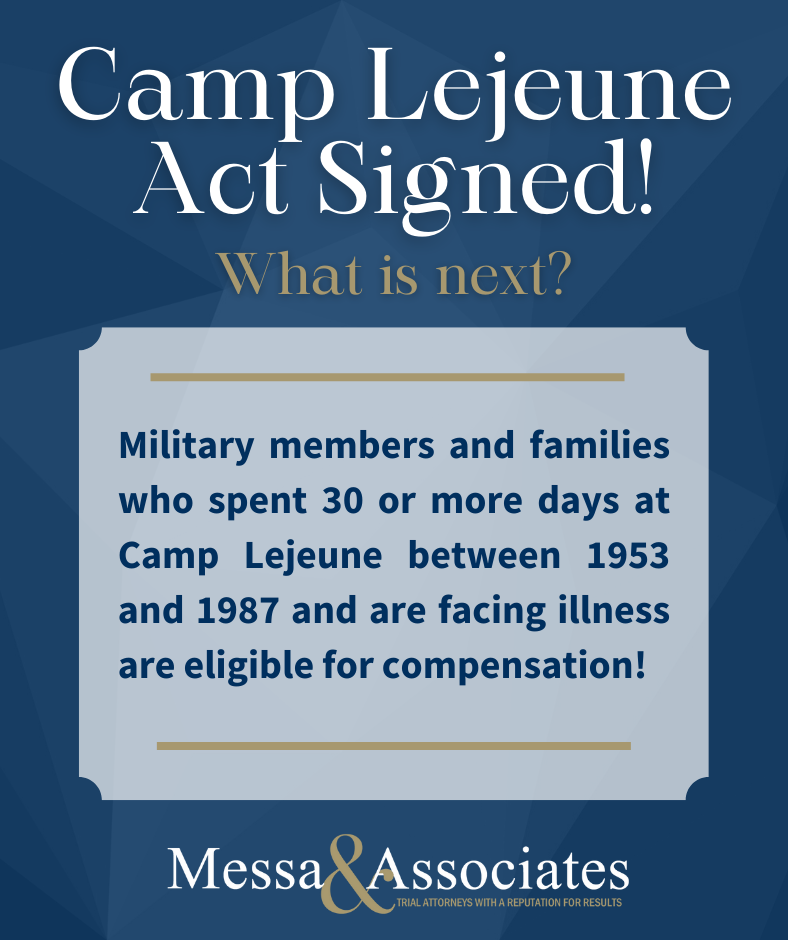 Over a million people made up of military personnel and their family members were exposed to contaminated water between the years 1953 and 1987.

The contaminated water is directly linked to injuries and illness to those exposed. According to MTMP, the injuries include the following:
Cancer
Neurological defects, such as Parkinson’s disease or Amyotrophic
Lateral Sclerosis (ALS)
Miscarriages
Birth defects
Other injuries

The government was aware of the contamination and neglected to take action, allowing innocent people to contract life-threatening diseases.

The United States Government failed to protect its service men and women, and their families. If you or someone you know spent time at Camp Lejeune between 1953-1987 and are facing illness, you deserve justice.
Philadelphia Attorneys at Messa & Associates, P.C.
In light of the recent findings regarding the water contamination at Camp Lejeune, Messa & Associates is now filing claims on behalf of military members and their families who spent 30 or more days at Camp Lejeune. If this sounds like you and you are interested in filing a claim, please contact our offices by calling 215-568-3500 or submit a case online.
Messa & Associates currently represents hundreds of veterans and active-duty servicemen and women nationwide who have been diagnosed with hearing loss and/or tinnitus as the result of the use of defective 3M earplugs during their military service. We acquired a $50 million verdict awarded to Luke Vilsmeyer against 3M for its defective Combat Arms 3M earplugs. The largest compensatory verdict for a single plaintiff against 3M in history.

Other mass tort claims we are currently representing clients against Philips CPAP, Zantac, Roundup, Boy Scouts of America, and more.