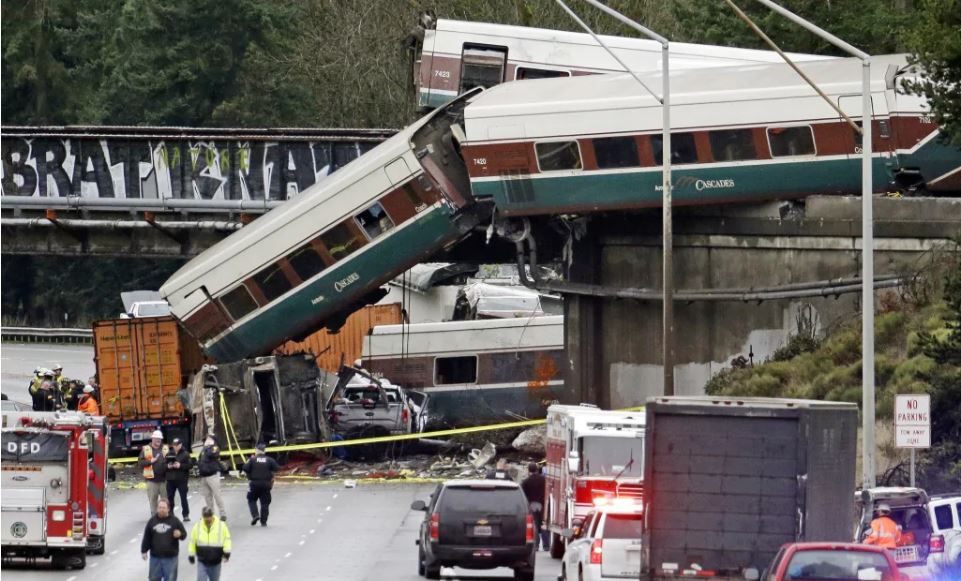 Train cars hang off the tracks over Interstate 5 after an Amtrak derailment in Washington state, about 40 miles south of Seattle. Officials said 13 cars jumped the tracks. (Elaine Thompson/AP)

On Monday, an Amtrak commuter train on its inaugural trip from Seattle to Portland jumped the tracks on a bridge, sending train cards into traffic on the busy interstate highway below. The National Transportation Safety Board (NTSB) discovered through their investigation that the train was traveling at twice the posted speed limit.

“Preliminary indications are that the train was traveling 80 miles per hour in a 30 mile per hour track,” NTSB member Bella Dinh-Zarr said Tuesday.

Three people were killed and more than 100 injured. Investigators claim that an automatic braking system known as positive train control (PTC) could have prevented the derailment with the use of sensors that would have slowed the train before it entered the left hand curve where it derailed.

“It can prevent collision,” said Deborah A.P. Hersman, former chairman of the NTSB and now head of the National Safety Council. “This technology has been proven. And each year we delay the mandate to put it on these routes is another year that passengers and communities are at risk.”

After a 2008 commuter train collision that killed 25 people in California, Congress mandated that all railroads have PTC installed by the end of 2015. Railroads told congress the $14.7 billion cost was “prohibitive.” Congress, whose members have accepted considerable campaign donations over the years from the railroad industry, responded with an extension to the end of 2018 and a possible further extension to 2020. In the meantime, civilians continue to die in derailments.

The 2015 Amtrak derailment in Philadelphia was also the result of a speeding train coming around a curve that did not have PTC installed. Eight people died and over 200 were injured in the wreck

Messa & Associates has a long standing history of successful representation of Railroad injury victims. Joseph L. Messa, Jr. filed a lawsuit in May 2015 in the Philadelphia Court of Common Pleas on behalf of 35-year-old Trevor Beddoe, a seriously injured victim of the Philadelphia Amtrak derailment. Messa & Associates also represents many victims of the 2012 Conrail derailment in Paulsboro, NJ that sent train cars into the Mantua Creek, releasing thousands of pounds of toxic vinyl chloride into the atmosphere. In addition, the firm represents the family of a deceased 17-year-old girl who was killed when the car she was a passenger in was struck by an oncoming Conrail train at an intersection that had no gates to signify or warn of oncoming trains.