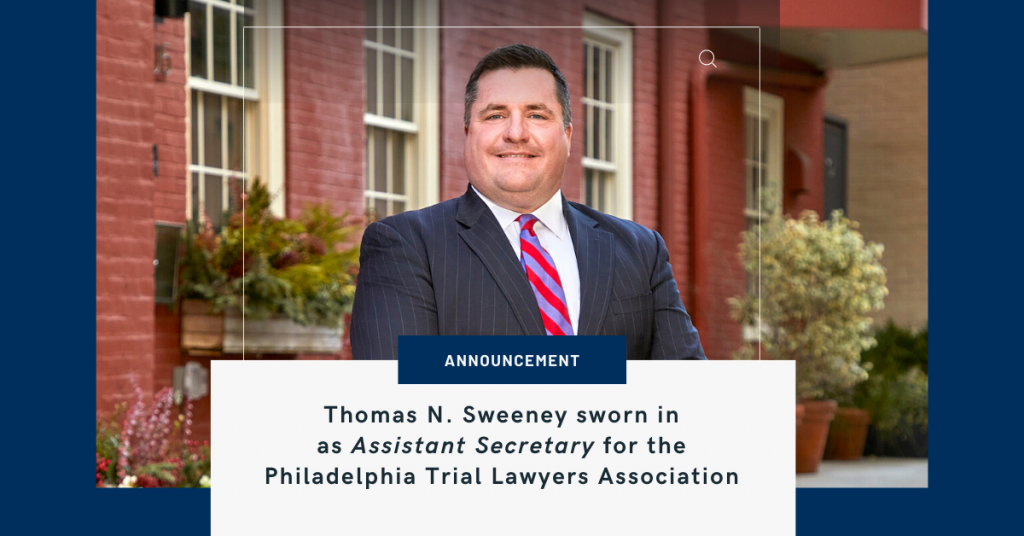 On Tuesday, Thomas N. Sweeney, Esq. of Messa & Associates was sworn in as Assistant Secretary of the Philadelphia Trial Lawyers Association – the oldest trial lawyer organization in America – during the organization’s second virtual annual meeting in as many years.

“It is an honor,” said attorney Sweeney of his election and subsequent induction, “to be elected to leadership of one of the country’s preeminent organizations dedicated to protecting the right to a jury trial under the 7th Amendment.”

Tom’s election as Assistant Secretary mirrors how Messa & Associates founder, Joseph Messa, began his own PTLA leadership journey in 2009. Messa went on to serve as Secretary, Treasurer, Vice President, President Elect, and finally President from 2015-2016. “I have no doubt Tom will serve the PTLA as Assistant Secretary with honor and dedication,” said Messa. “I hope Tom will follow the same path that I did as a leader within the PTLA, because I believe that our members, our organization, and our city would benefit under the thoughtful and focused leadership that I know Tom would provide.”

The Philadelphia Trial Lawyers Association (PTLA) is dedicated to the preservation of Civil Justice System and every citizen’s right to trial by jury. In addition to its work for victims of negligence, the PTLA supports continuing legal education for attorneys in Philadelphia by sponsoring a Luncheon Lecture Series and numerous seminars. The organization also honors exemplary law school seniors with trial advocacy awards.

Thomas Sweeney has been an attorney with Messa & Associates for 13 years. In that time, he has secured multiple million- and multi-million dollar settlements and verdicts for injured victims of negligence. This year, Tom was named to the Pennsylvania Super Lawyers and Top 100 Philadelphia lists for the eighth consecutive year.