Traumatic Brain Injuries Caused by Playground Accidents on the Rise 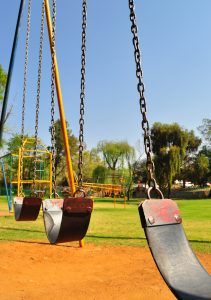 The Journal Pediatrics published a report yesterday about a significant rise, from 2001 to 2013, in the amount of emergency department visits caused by playground-related head injuries in children aged infant to fourteen years old.

From 2001 to 2013, a yearly average of 21,100 children were treated in emergency rooms for traumatic brain injuries (TBI). The lowest in that average was in 2005, with 13,720 TBI treated. The highest occurrence was in 2012 with 32,020 head injuries treated, followed by 29, 410 in 2013. The report blamed monkey bars, playground gyms, and swings as the cause for the vast majority of these traumatic brain injuries, with the most popular of these causes varying with patient age.

It’s difficult to pin down a cause for the drastic rise in playground-related TBI since playgrounds are generally much safer then they were in the past. Softer, more resilient surfaces are being used to pave playgrounds, and the play equipment itself is designed for safer play. The research data, however, helps paint a somewhat clear picture of possible causes for the TBI increase.

Gary A Emmett, M.D., F.A.A.P., Director of Hospital Pediatrics at TJU Hospital, Pediatrics Professor at Thomas Jefferson University, and contributor to Philly.com’s Healthy Kids blog, had his own opinions on the conclusions to be drawn from the playground head-injury study.

The researchers also recognize the need for “appropriate supervision and child behavior modification.” Dr. Emmett believes that some aspect of this is true – the aspect that addresses the vast majority of parents that sit and stare at cell phones while their children play, unobserved. However, he makes a good point that while supervision is vital and necessary to a young child’s safety, too much supervision or intervention could interrupt the long-term development of a child’s social and problem solving skills.

Messa & Associates, P.C. is experienced and successful in cases involving injuries and death on playgrounds. In 2015, the firm earned a $6.1 Million settlement for a three-year-old girl who lost her eye on a playground fence. In 2010, Messa & Associates earned a $5.75 Million settlement for the family of a two-year-old girl who died after becoming trapped and suffocating underneath a playground slide.

If your child has been injured in a playground accident or by defective or faulty playground equipment, please do not hesitate to contact the Philadelphia personal injury attorneys at Messa & Associates by calling toll free, 877-MessaLaw, for a free consultation. You may also submit an online inquiry and received a free case evaluation.