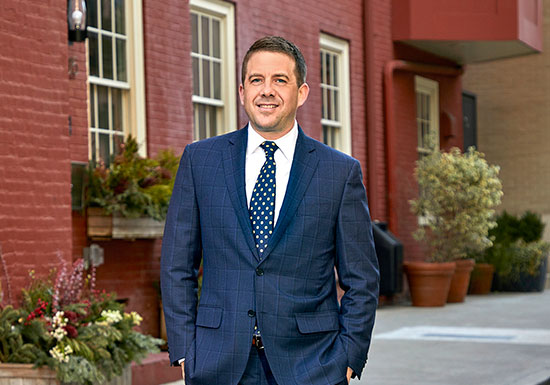 Before joining Messa & Associates, Mr. Furber worked as an Assistant District Attorney in the Philadelphia District Attorney's Office. After only six years, Furber was promoted to the position of Prosecutor for the Homicide Unit – a position most DA's never attain. Mr. Furber has tried dozens of homicides and major crime trials. His outstanding trial skills have been clear since the beginning of his career (as evidenced by this meteoric rise to Homicide) and are an invaluable asset to the firm.

Furber comes from a long line of legal professionals, his father the former President Judge of the Montgomery County Court of Common Pleas, and his brother a prosecutor in the Manhattan District Attorney’s Office.

Mr. Furber received his Bachelor of Arts from University of Maryland, College Park in May 2003 and his juris doctor from the Beasley School of Law at Temple University in 2008. While in law school, Brett was a staff member for the Temple International & Comparative Law Journal, a member of the 2007-2008 trial team, and winner of the Outstanding Oral Advocate Award in the National Criminal Justice Trial Competition of 2008.

In 2018, Furber was selected to the Pennsylvania Super Lawyers Rising Stars list, a designation awarded to top performing Pennsylvania attorneys under 40 based on committee and peer nominations. Less than five percent of attorneys in PA are awarded Super Lawyers selections.

Attorney Furber is licensed to practice law in the Commonwealth of Pennsylvania and the State of New Jersey.

$15.8 Million total recovery including a full jury verdict, delay damages, and post judgement interest against the Philadelphia Joint Board Workers' Union on behalf of a pedestrian who was struck by a trade union vehicle operated by an intoxicated, unlicensed, non-union employee. The initial $12.9M verdict was the highest motor vehicle verdict in Pennsylvania in 2019.

$840,000 settlement on behalf of Melvin Santos, a house painter who sustained severe injuries including a concussion resulting in post concussive syndrome and multiple fractures resulting in traumatic arthritis of the wrist, after falling nine feet through an unguarded hole on a job site. Due to his injuries, Mr. Santos is unable to return to work or care for/support his family.

$800,000 settlement on behalf of a nursing home abuse victim who suffered multiple falls and sustained serious injuries that ultimately led to his death.

$568,375 verdict against the American sardine Bar, on behalf of a three-year-old boy who was permanently disfigured by a dog-bite on the restaurant's property when he was only 17 months old.

$478,000 verdict against Mercy Fitzgerald Hospital and Trinity Health on behalf of Michelle Robinson. Ms. Robinson sustained a tibial fracture and aggravation of lumbar degenerative disc disease, spondylosis, and arthritis after a fall from her wheelchair due to the defective and dangerous condition of the defendants' handicapped parking spaces.