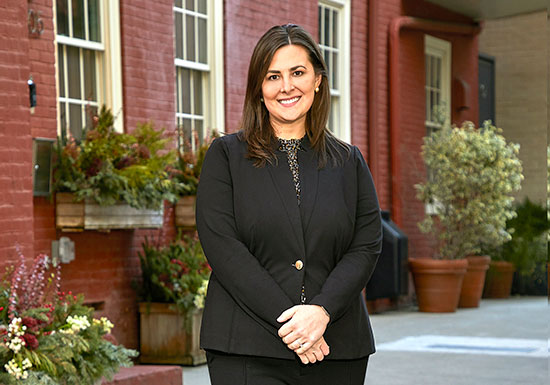 Megan M. Kwak, Esq. concentrates her legal practice on complex catastrophic injury litigation with emphasis on medical malpractice including birth injuries, brain injuries, and missed diagnoses, products liability, transportation crash cases, and other complex personal injury matters. Ms. Kwak is admitted to the bars in both Pennsylvania and New Jersey, and in Federal Court for the Eastern and Middle Districts of Pennsylvania.

While in law school, Ms. Kwak was a member of both the Moe Levine Trial Advocacy Society and the Alternative Dispute Resolution Society at Widener. Additionally, she was recognized with pro bono distinction as part of the Martin Luther King Semester of Service. Ms. Kwak held a position at the Chester County District Attorney’s Office for more than one year, where she was authorized for limited practice.

In 2017, Ms. Kwak was named by The National Trial Lawyers as Top 40 Under 40 for Civil Plaintiffs. In 2018, Kwak was selected to the Pennsylvania Super Lawyers Rising Stars list - a designation awarded to top performing Pennsylvania attorneys under 40 based on committee and peer nominations - and has been selected to that list of Rising Stars every year since. Less than five percent of attorneys in PA are awarded Super Lawyers selections. She is a member of the Philadelphia Trial Lawyers Association, the Philadelphia Bar Association, and the Pennsylvania Association for Justice.

$18.5 Million medical malpractice settlement for a US Marine who suffered multiple amputations after a missed diagnosis (served as co-counsel).

Confidential eight-figure settlement in Central Pennsylvania on behalf of a family grieving the loss of a young woman and infant in a horrific trucking crash. (served as co-counsel).

$8 Million products liability settlement for the family of a young girl who was killed in a fire caused by defective products.

$5.25 Million settlement against a leading smoke detector manufacturer and retailer after defective ionization smoke detectors failed to warn of a growing fire which led to the deaths of two family members who became trapped inside the home.

$5.2 Million settlement for a young woman who suffered severe physical and emotional injuries after being run over by a garbage truck. (served as co-counsel).

Confidential $4.6 million settlement in a medical malpractice lawsuit involving severe, permanent, and profoundly disabling injury to a child at birth due to the physicians’ failure to promptly deliver the child despite evidence of fetal distress. (served as co-counsel).

$3 Million verdict for a carpenter who sustained serious and permanent injuries after a temporary staircase on a construction site collapsed underneath him (served as co-counsel).

Confidential $3 million settlement of behalf of the Estates of a young woman and her unborn child who died nine hours after being discharged from the hospital when her medical providers failed to recognize the signs and symptoms of an abdominal bleed. (served as co-counsel).

Confidential seven-figure recovery in a North Central Pennsylvania county for a family of a teenage girl who was tragically killed after a train struck the car she was a passenger in, as it drove through a railroad crossing that did not have automatic crossing gates. (served as co-counsel).