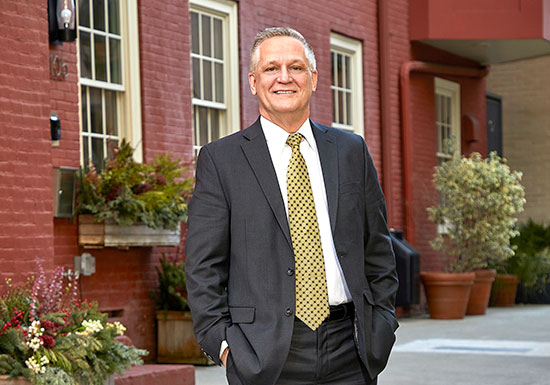 Mr. Heleniak is certified as a Civil Trial Specialist by the National Board of Trial Advocacy. As a successful trial lawyer, Mr. Heleniak has achieved significant awards and settlements for his clients including many in excess of one million dollars. He has been recognized by his peers as a top attorney in his field, having received an AV-Preeminent Lawyer rating through Martindale-Hubbell Peer Review Ratings (highest rating available for Legal Ability and Ethical Standards) for thirteen consecutive years.
Mr. Heleniak is also a trained and experienced mediator and arbitrator, particularly in medical legal and personal injury matters, and is accepted as a neutral arbitrator in insurance arbitrations. He also serves as Judge Pro Tem for the Philadelphia Court of Common Pleas, presiding over settlement conferences on behalf of the Court.

Mr. Heleniak is a volunteer with the Montgomery Child Advocacy Project, through which he provides pro-bono legal representation and acts as legal guardian for children who have been abused.

Mr. Heleniak has been selected to the Pennsylvania Super Lawyers list each year from 2006 through 2009 and 2011 through 2021. He’s also been featured in Philadelphia Magazine and was voted to the New Jersey Super Lawyers list annually from 2013 to 2021. He is a member of the Million Dollar Advocates Forum which admits only those attorneys who have achieved verdicts and settlements for their clients in excess of one million dollars. He has been recognized as a Top100 Trial Lawyer by the National Trial Lawyers organization for the last five years.

$2.15 Million verdict affirmed on appeal by the Superior Court and Supreme Court for the death of a baby as a result of injuries sustained at birth.

$1.6 Million medical malpractice settlement on behalf of a 62-year-old male client whose primary physicians deviated the standard of care by 1) failing to advise him of his high-risk factors for Prostate Cancer, and 2) failing to provide helpful prostate cancer screening. These failures resulted in a diagnosis of Stage IV Prostate Cancer with metastasis that is now, tragically, inoperable and incurable.

Multi-million dollar settlement against highway construction companies whose negligent management of a road construction site caused an accident in which the client sustained a catastrophic head injury which resulted in cortical blindness.

$1.4 million dollar recovery of lost profits and equipment costs for small business owners whose leased building was destroyed by fire which spread due to the failure of the building owners to comply with safety codes or to provide fire retardant and suppression equipment.

$1.3 Million verdict in medical malpractice case regarding injuries sustained as the result of negligent gynecological surgery.