The MessaLaw Blog is spending the month of February honoring the achievements and contributions of African Americans to America’s legal system. Today, we will discuss America’s first black Supreme Court Justice, Thurgood Marshall. 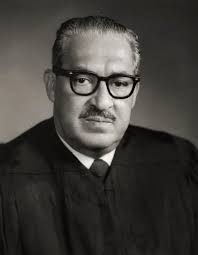 Thurgood Marhsall became the first African American justice of the Supreme Court. His work was instrumental in bringing about the end of legal segregation in the United States.

Thurgood Marshall was born in Baltimore, Maryland on July 2, 1908, a descendant of slaves on both his mother’s and father’s side. As a teenager, Marshall attended Frederick Douglass High School in Baltimore and graduated a year early in the top 1/3 of his class. Marshall attended Lincoln University where over time, he developed an active interest in protesting segregation. He graduated cum laude with a Bachelor’s Degree in Humanities. Marshall couldn’t attend his hometown law school at the University of Maryland because of the school’s segregation policy, so he instead attended Howard University School of Law. He graduated number one in his class in 1933.

Following graduation, Marshall started a private law practice in Baltimore. In 1934, he began his affiliation with the NAACP by representing the organization in Murray v. Pearson, a discrimination lawsuit that involved University of Maryland Law School and qualified black applicant, Donald Gaines Murray. Murray was denied admission to University of Maryland Law School based on the institution’s segregation policy. Marshall argued that the policy violated the “separate-but-equal” doctrine of Plessy v. Ferguson because Maryland did not offer a comparable educational opportunity to black men and women. The Maryland Court of Appeals ruled in favor of the plaintiff, stating, “Compliance with the Constitution cannot be deferred at the will of the state. Whatever system is adopted for legal education must furnish equality of treatment now.” This case was the first in a long string of court victories for Marhsall that served to advance equality for African Americans.

In 1961, Marhsall was appointed by President John F. Kennedy as a judge for U.S. Second Circuit Court of Appeals. He held the position for four years, during which not one of his 100 decisions were overturned by the Supreme Court.

In 1965, President Lyndon B. Johnson appointed Marshall to serve as America’s first African American U.S. Solicitor General. Over the next two years, Marshall won 14 of the 19 cases he argued before the Supreme Court.

In 1967, President Johnson nominated Marshall to serve on the United States Supreme Court and on October 2, 1967, Thurgood Marshall was sworn in as the first African American Supreme Court Justice. He retired in 1991 after 24-years on the Court.

MArshall married Vivian “Buster” Burney in 1929 and the two remained married until she died in 1955. Shortly after, Marhshall married Cecilia Suyat, his secretary at the NAACP. They had two sons together, Thurgood Jr., a former top aide to President Bill Clinton, and John Marshall, a former US Marshals Service Director.

Marhsall died of heart failure on January 24, 1993 at the age of 84. He is buried in Arlington National Cemetery.

Marshall’s work as a civil rights attorney left an indelible mark on the United States, launching the civil rights movement and bringing about real equality for African Americans. His time on the Supreme Court was spent supporting rulings that upheld individual rights and issuing dissents when he was in disagreement with conservative members of the Court.

Many of the law students who served as his law clerks went on to become successful attorneys, judges, Supreme Court Justices, law professors, and law school deans. There are statues that honor Marshall, as well as schools, libraries, airports, youth centers, and federal office buildings named after him. Plays and movies have been written honoring Marshall’s life of service to the United States, dedicated to the advancement of African American citizens and all individual rights.