The MessaLaw Blog is spending the month of February honoring the achievements and contributions of African Americans to America’s legal system. Today, we will discuss the Honorable Irvin Charles Mollison, the first African American appointed to serve as a Federal Judge in the United States. 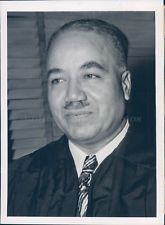 Irvin Charles Mollison was born on Christmas Eve, 1898, in Vicksburg, Mississippi. In 1920, Mollison received his bachelor’s degree in Philosophy from the University of Chicago. Mollison earned his Juris Doctor in 1923 from the University of Chicago Law School. From 1923 to 1945, Mollison had a private practice in Chicago, Illinois and in 1940, Mollison earned significant recognition for his work on Hansberry v. Lee, a civil court case that dealt with a racially restrictive real estate covenant barring African Americans from purchasing or leasing land in the Washington Park subdivision of Chicago’s Woodlawn neighborhood. Mollison successfully argued on behalf of his clients before the Supreme Court that the covenant, which had been deemed valid by courts in a previous lawsuit, should be open to contesting. The Supreme Court agreed with him and a later court case, Shelly v. Kraemer (1948), ruled that racially restrictive real estate covenants were not enforceable in court and prohibited by the Equal Protection Clause of the State-Action Doctorine.

Mollison’s client, Carl Augustus Hansberry, was the father of famous African American playwright, Lorraine Hansberry. The struggle inspired Hansberry’s best known play, A Raisin in the Sun, which centered around the family of Walter and Ruth Younger, living in poverty in the Washington Park subdivision in Chicago’s Woodlawn neighborhood, and trying to “better” themselves after receiving an insurance payout following the death of their father.

On October 3, 1945, Mollison was nominated by President Harry Truman to serve as a Judge for the United States Customs Court (now known as the United States Court of International Trade). He was confirmed by the Senate on October 26th without a single dissenting vote. Three days later, he received his commission, making him the first African American to serve as a Federal Judge in the U.S., and the first African American to serve on the Customs Court.

Judge Mollison served on the Court until his death on May 5, 1962.