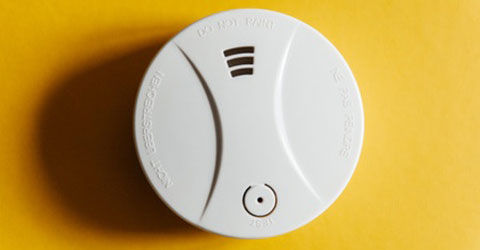 Each year almost 17,000 people die in household fires. According to the Consumer Product Safety Commission (CPSC), fires are the second leading cause of unintentional death in the home. Ironically it is rarely the fire itself that causes injury or death, but rather the smoke from the fire. It is for this reason that smoke detectors (and carbon monoxide) detectors are so important.

Whether we are talking about your own home, or a rental property, a few basic steps can help create a safer environment.

UL-approved smoke alarms may give false sense of security

Ionization Smoke Detectors, manufactured by Kidde, BRK, Fire X, First Alert, Firenetics and others are designed to detect fast flaming fires that give off little smoke, and unfortunately not slow smoldering smoky fires which again are the most common type of residential fire. In addition, Kidde Ionization Smoke Detectors are the most common household smoke detector on the market.

Photoelectric Smoke Detectors are designed to detect slow-burning fires as well as the flash fires ionization smoke detectors specialize in handling. These smoke detectors only cost about $20 and the technology has been available for almost 30 years.

In a recent letter, Kidde Inc. stated they recommend “consumers use both types of smoke alarms in their homes.” Yet, there still has been no change to the label and packaging of ionization smoke detectors.

There are numerous cases pending across the country associated with the deaths and injuries caused by defective ionization smoke detectors.

In the past several years Messa & Associates has represented many victims who suffered catastrophic injuries, including death, as a result of a fire.

In fact, Messa & Associates is one of the few law firms in the United States with extensive experience with smoke detector/fire case﻿﻿s. Our attorneys have successfully litigated several cases where injuries or deaths have been attributed to smoke detectors including:

Our Philadelphia products liability attorneys recently negotiated a substantial eight-figure settlement for the estate of a family of seven who perished in a house fire due to faulty smoke detectors. The family included five children, two of whom were twin boys. The evidence showed that ionization smoke detectors, designed, manufactured and sold by one company, were defective because they failed to sound an alarm despite the presence of significant smoke inside the house. In lieu of this tragedy, we ask everyone to please use caution and educate themselves prior to purchasing smoke detectors for their home. If you have any questions, or have been involved in an accident involving defective smoke detectors in Philadelphia, Pennsylvania, New Jersey or Delaware, please contact Messa & Associates at 1–877–MESSALAW (1-877-637-2529).