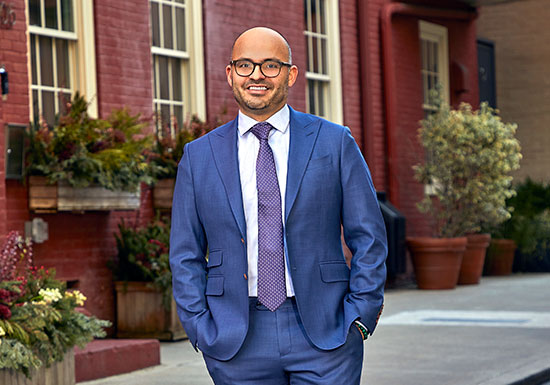 Ramon Arreola is a Partner at Messa & Associates. He concentrates his practice on complex personal injury litigation, including products liability, toxic tort, transportation accidents, construction accidents, and other worksite injuries.

As an experienced and successful litigator, Ramon (Ray) Arreola has secured several significant verdicts and settlements for his injured clients. Mr. Arreola has been recognized in multiple industry publications for his record-setting client awards and skilled legal representation. His relationships with many of the workers' unions in Philadelphia have made Mr. Arreola a sought-after advocate for construction and other laborers injured on the job.

Outside his legal practice at Messa & Associates, Attorney Arreola provides pro bono legal services to indigent citizens of Philadelphia through the Philadelphia Volunteers for the Indigent Program (VIP).

Ray Arreola earned is J.D. from the University of Baltimore School of Law in 2007. He received his Bachelor of Arts from Loyola College of Maryland in 2004.

Mr. Arreola has been recognized by Pennsylvania Super Lawyers and named to their list of Rising Stars every year since 2013. He was also named one of the National Trial Lawyers Top 100 and Top 40 under 40 from 2014-2019, a Top 100 Rated Attorney in Global Who's Who, and is currently eligible for membership in the Multi-Million Dollar Advocates Forum.

$15.8 Million total recovery including a full jury verdict, delay damages, and post judgement interest against the Philadelphia Joint Board Workers' Union on behalf of a pedestrian who was struck by a trade union vehicle operated by an intoxicated, unlicensed, non-union employee. The initial $12.9M verdict was the highest motor vehicle verdict in Pennsylvania in 2019.

$8 Million products liability settlement for the family of a seven-year-old girl who was killed in a fire caused by a defective curling iron and defective power strip.

$7 Million products liability settlement for a Union carpenter who sustained career-ending injuries after a defective pair of drywall stilts broke underneath him.

$2 Million settlement (largest recorded table-saw injury settlement) for a young man who lost his middle finger and injured his index finger on his dominant right hand as a result of a defective Ryobi table saw.

$1 Million settlement for a 55 year-old former factoryworker who suffered several fractures requiring multiple surgical procedures and amputation of two toes on her right foot after being struck in the street by a Ford F-450.

$1 Million settlement on behalf of a client who sustained permanent physical and emotional injuries after falling through an unsecured temporary floor on an OSHA non-compliant construction site.

$850,000 settlement on behalf of a Philadelphia man who fell through a warehouse roof on a job site where he was employed.